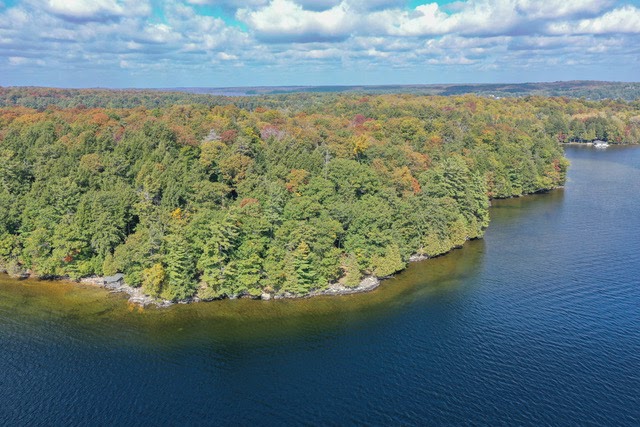 Muskoka has become an increasingly popular destination for cottagers….and developers. The following real-life stories serve as inspiring examples of how the community can respond to the threat of overdevelopment and preserve Muskoka property in perpetuity by developing responsibly. 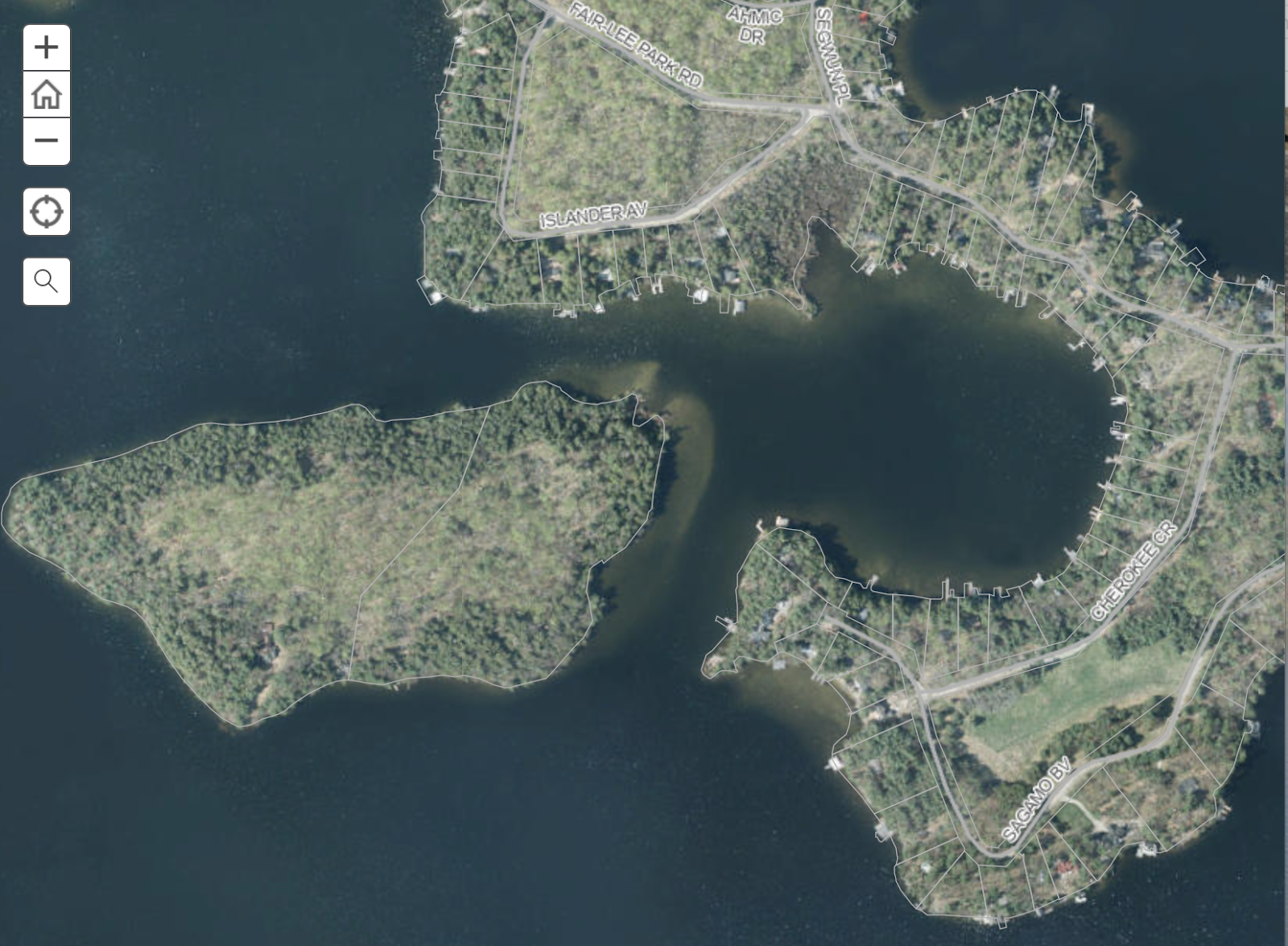 The large Highland Island (also known as Warner Island on many maps), consisting of 42 acres and 7500 feet of shoreline located on south side of Royal Muskoka Island, was purchased from the Crown in the late 1870’s, for $45. It changed hands in the early 1880’s and the first house was built, a massive 12-bedroom house with wrap around verandahs and a 30×40 foot dining room. Several generations of family spent their summers there since then. The remains of that house still stand but has been in complete disrepair for many years now, so the island is effectively undeveloped. There was no hydro to the island, so for many years the house was lit only by kerosene lamps. It is first growth forest, with the average age of the trees being 150 years.

The island had been in the same family from that time until most recently, when it was under contract by the developer of Legacy Cottages in Minett, with plans to create 14 building lots. Fortunately, the developer didn’t complete the purchase agreement and the island was then purchased jointly in September of 2020 by Don and Karen Lang and Seth and Theresa Mersky, with the hope of preserving more than half the island as part of the Muskoka Conservancy.

When the Langs and Merskys, who are longtime cottagers on Lake Rosseau and who also own and have preserved old Muskoka cottages built pre-1900, first heard of the developer backing out of the contract, they approached the owners, who the Merskys knew, having rented the Highland Island cottage many years earlier. The idea of creating as few lots as possible to cover out of pocket cash costs and donating the balance to the Muskoka Conservancy was very much from the heart, as both the Langs’ and the Merskys’ cottages are quite a distance from Highland Island. It was an opportunity to give back to Muskoka, a place that has meant so much for both families who have now enjoyed Muskoka for their 2nd and 3rd generations.

The plan is to create and sell 4 building lots on the south side of the island and donate the north shoreline to the Muskoka Conservancy. Donations of land are tax deductible when done in accordance with CRA guidelines, helping to offset the cost of the land and improvements.  This shoreline, which the Royal Muskoka Island (and approximately 30 cottages) presently faces, will now have the security of enjoying it as it has always been – an unspoiled shoreline of forest and nature. This will be the first Lake Rosseau shoreline donated to the Muskoka Conservancy, which since 1987 has worked to protect 44 properties totaling over 2,700 acres of land, 60,000 feet of shoreline and 600 acres of wetland in the District of Muskoka.

The Langs and Merskys definitely weren’t experts on how to pull off this endeavour, but learned quickly and with support from expert planning, legal and tax professionals and the Muskoka Conservancy, the east side was approved this Spring and the application process for the west side has started. 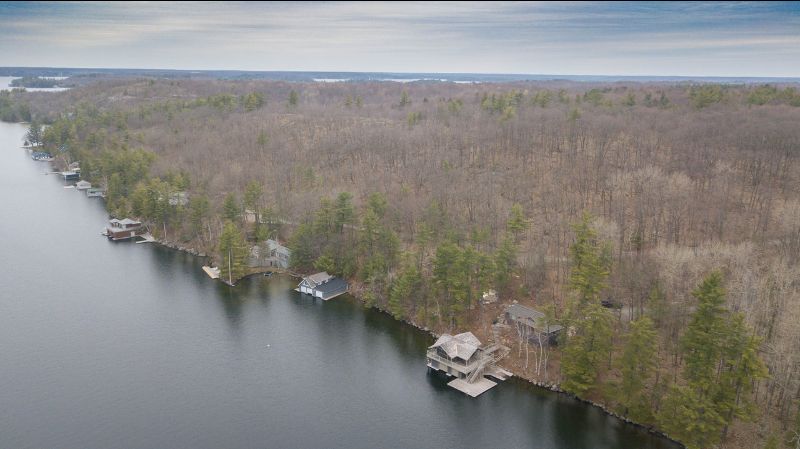 Neighbours conserve forever over 100 acres of ecologically sensitive lands behind their cottages.

This is the inspiring story of a group of neighbours who worked together to successfully oppose the development of a piece of property behind their cottages, and to preserve it forever through the Muskoka Conservancy.

Nearly a decade ago, a developer acquired 110 acres behind several cottages on south Lake Joseph with two strips of land, 25’ and 72’ wide, extending down to the waterfront. These two strips run between other waterfront properties and were likely originally intended to be water access for logging purposes.

In 2016, the developer requested a variance from the Township of Muskoka Lakes to build a cottage on the 72’ wide piece of waterfront property. Neighbouring owners Beth and Andy Burgess and several others were understandably nervous and drove to Port Carling in December to object. The Township denied the application as the lot has well below the minimum required shoreline. The following year, the developer applied for relief to build a cottage at the top of the hill behind the other waterfront properties. Again, the neighbours organized to object, and again the Township said no to the developer. This time, he appealed the decision to the OMB (later LPAT).

A group of concerned neighbours collected funds and hired a lawyer, planner and biologist to put forward a compelling case at LPAT as to why the intended development was contrary to the Official Plan and would harm the local environment. LPAT ruled in favour of the neighbours in the fall of 2019.

Having lost his appeal, the developer put the property up for sale, and it was purchased for $990,000 by a local construction company owned by Lake Joseph cottager, Corey Hawtin. The neighbouring cottagers approached Mr. Hawtin and, after much discussion, he sold the property to them for his cost despite receiving interest in the property for a higher amount. Mr. Hawtin shared neighbours’ concern about developing a cottage behind other cottages and the precedent this might set for a type of development that would damage the waterfront’s natural beauty and inappropriately increase density, noise and pollution surrounding neighbours’ cottages.

The neighbours struggled to raise the funds to purchase the property but received contributions from Mr. Hawtin, the real estate agent and even some generous cottagers across the bay. At this point, they approached the Muskoka Conservancy to acquire the property with donations from the neighbourhood group. The Conservancy pitched in as well and, together, they created the Pinelands Bay Nature Reserve.

Some of the neighbours also acquired parcels of the land and the majority was donated to the Conservancy in exchange for a charitable tax receipt for the money contributed. They will also avoid ongoing property taxes and maintenance costs on the conserved lands. Most importantly, the property will now be preserved forever.